I don’t have much of a sweet tooth. I am not claiming any kind of healthy moral high ground here because I have a profoundly developed wine and cheese tooth. Sweets, though? Meh. I have one enjoyable exception to this, however. If you are the kind of person that likes your occasional chocolate indulgence with a streak of OCD, then you already know where I am going with this sentence: KIT KAT BARS. From a sensory and organizational perspective, a Kit Kat meets all of the key candy bar criteria. They are crunchy, sweet, and you can sing that cool jingle while you’re eating them. I know what you’re saying: there are many junk foods that meet these qualifications. What’s so damn special about Kit Kats? PIPE DOWN. I AM TELLING YOU.

Kit Kats are in my personal Candy Bar Hall of Fame because they are thoughtfully, perfectly, and perhaps a bit neurotically pre-divided into segments THAT ARE ALL THE EXACT SAME SIZE THAT YOU CAN CONSUME IN THE EXACT SAME NUMBER OF BITES PER SEGMENT. There is glorious symmetry and precise portioning packed into those bright red wrappers. It’s thrilling to be able to get so much of my crazy addressed in one little foodstuff. I can take that little bar and break it apart into exact-sized pieces and there are so many ways to do it. Halves, quarters, remove one quarter at a time and nibble on it all day…so delicious. (HAHAHAHAHA it never lasts all day I always eat it in like 15 minutes.) So crispy. So anal-retentive. It scratches my OCD itch, hard. 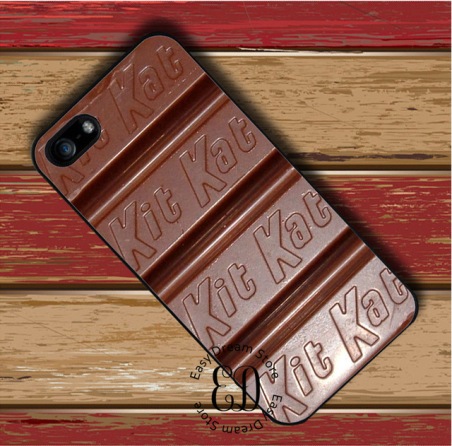 I would 100% chip a tooth on this phone case

Of all the delightful aspects of eating Kit Kats, the most delightful one for me is the Kit Kat Sister Rule, which states that the only time I’ll indulge is if I can share one with my sister. Kit Kats have a recurring role in our sisterly interactions. It is the loveliest of things because our shared DNA has bequeathed us a shared preference for chocolate eaten following our Chocolate Consumption Rubric, but that same DNA spares us from having to explain our crazy to each other. We just get it. At the movies with my sister? One dinner-plate sized Kit Kat and one jug of Coke, please. (Concession stand sizes…amirite) Traveling with my sister? She always brings a Kit Kat for the plane (any size is allowed under Chocolate Consumption/Travel, but generally the longer the flight the bigger the bar), to be brought out after the beverage cart shows up. Family functions? We hide a Kit Kat in someone’s purse to keep it from the masses while we surreptitiously break off parallel rectangular bites. It’s a tasty ritual that binds us and defines our sisterhood. All of these great things-symmetry, compulsive chocolate disbursement, and how even the smallest of things reveal a family story-swirled around over and over in my head while reading Yaa Gyasi’s complex, layered, astonishing novel Homegoing.

Homegoing tells the story of a family dynasty that originates in the 17th century on Africa’s Gold Coast with half-sisters Effia and Esi. Born to the same mother but unknown to each other, the sisters are absorbed into the transatlantic slave trade. Esi is sold into slavery and taken to the American colonies on a British slave ship. Effia is taken as a wife by the British governor of the Cape Coast Castle, a coastal fort where captured slaves were kept in dungeons before being taken to the New World. Gyasi threads the stories of these sisters across years and through generations, revealing shared characteristics and fragile connections of lives lived on two continents, of families disrupted and displaced because of the capricious and fickle nature of war, politics, and the chaotic and hateful echo of slavery. Tribal conflict, the American Civil War, Ghana’s establishment as an independent nation-all serve as a backdrop as Effia’s and Esi’s descendants find ways to survive lives broken by indifferent and powerful forces.

There are a lot of reasons to read Homegoing, but what I and my OCD self could not get enough of is how perfectly structured this book is. Book structure doesn’t really get enough love when talking about why a book is good. We will dress up as our favorite book character for Halloween or wear socks with favorite book quotes, but when is the last time you saw tote bag for sale at the bookstore that says “Narrative Arc Really Turns My Pages”? You haven’t, not only because that’s a terrible slogan, but because literary architecture is a little more subtle than other parts of a novel. It’s underneath all the flashy stuff, with a solid story structure making the difference between a buoyant reading experience and “UGH THIS BOOK JUST NEVER ENDS I’M DYING”. Gyasi takes Homegoing’s themes of home and history, of fire and water, and breaks them apart into perfect, symmetrical segments, segments that seamlessly come together, with every word in the book serving as counterweight to the words that come before and after. It takes the epic scale and grounds it into an intimate, rich, effortlessly paced book. Gyasi makes the heavy lifting look easy. I read Homegoing in one sitting and snarled at anyone who tried to interrupt me.

For some, genealogy is a privilege, because records exist that tell you where you come from. For others, family history is lost, accessed only through wistful speculation. Homegoing imagines a lost history recovered in a perfectly balanced novel that breaks apart for ideal consumption. Feel free to read it, then go share a Kit Kat with someone who just gets you. Don’t ask for mine, though. My sister and I aren’t sharing. It’s a family tradition.

This is Yaa Gyasi’s first book. IT’S ONLY HER FIRST BOOK. Cannot wait for the second one. Click on the link for her interview with Trevor Noah on The Daily Show.

According to the internet, everyone is making this Kit Kat cake.