A few weeks back, I posted a detailed cry for help in which I described how distinguished author Ben H. Winters was holding me hostage. (You can read about Ben H. Winters’ indifference to my plight here.)As a result of my signal flare, a friend crawled into my foxhole with me and picked Underground Airlines for her book club read. When I asked her what she thought of the book, she 1.heroically ignored my clapping and bouncing up and down when I asked the question because I could not WAIT to effuse about the book with someone and 2. Said she really liked it but was a bit ticked because she does not usually read trilogies. Confused, I pointed out Underground Airlines is a standalone book. She responded “Are you kidding? That is the first book in a trilogy if I ever saw one. Like we are NOT going to get the next part of that story?”

Well, hell. Upon reflection, Underground Airlines could be the first in a trilogy. For the record, I asked the internet if there are any follow-up books forthcoming. The internet said “What the hell? This book was only published in JULY. Slow your roll.” Okay, internet, CHILL, it was just a question. It’s interesting, though, that instinctive phobic reaction so many people seem to have about trilogies. I don’t have any science on this or anything. It’s just based on my experience recommending books to people only to be asked “Is that book in a trilogy? I don’t do trilogies.” It is a delicate and serious thing to open one book knowing that you are in essence opening three. It takes your book status from “in a relationship” to “it’s complicated” to “what am I, getting married here?” at warp speed.

If you are trilogy-shy, I am here to support you by cramming a trilogy recommendation into your reluctant hands. Don’t think of it as a trilogy! Think of it as…a house party where you get to hang out with some jacked up, compelling people. Think of it as a three-day weekend in an exotic place you’ve never been. Think of it as a blind date set up by someone you really, really trust and who would NEVER stick you with the book equivalent of Jon Gosselin. Think of it as your chance to find some brand new literary crushes.  Do not deny yourself the pleasure of Lyndsay Faye’s brothers Wilde, Valentine and Timothy, the heart and heartbeat of the Gods of Gotham trilogy.

The Gods of Gotham, Seven for a Secret, and The Fatal Flame tell the story of the founding of New York City’s modern Police Department, a story that Lyndsay Faye is uniquely qualified to tell. Her first book, Dust and Shadow: An Account of the Ripper Killings, is a Sherlock Holmes story narrated by John Watson. (It is a standalone book, YES, if I can’t talk  you into a trilogy.) That Sherlockian momentum that encompasses a diverse, lively setting, organic, intricate plots and memorable characters carries forward into the Gods of Gotham. If you read this trilogy for no other reason, do it to cast the movies in your head, because the Wilde brothers and all the New York citizens that surround them are going to get under your skin. Lyndsay Faye is a genius at characterization and she gives her characters a solid, startling setting in which to do their thing. New York City in 1845 was multiple worlds existing in parallel: Tammany Hall and tenement immigrants, abolitionists and brothel owners, the desperately poor working class and the newly wealthy industrial barons. When those streams cross, all kinds of stuff is liable to happen. Right about now, you’re expecting me to break down each of the books with a little high-level summary. TWIST! I am not going to do that. What I am going to do is tell you about MAH BOYZ. 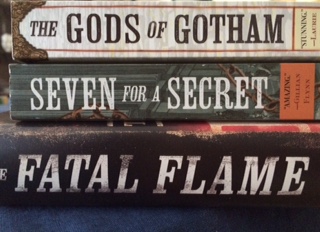 Don’t think of it as a trilogy. Think of it as three books tied together by common characters, story arc, and setting.

Timothy and Valentine Wilde are themselves the embodiment of 1845 New York City. Valentine Wilde is the older brother and the political animal, an enthusiastic member of the party machine and a powerful local celebrity. Valentine doesn’t see corruption – he sees opportunity. He sees favors granted, favors denied or favors wrangled. He delights in the maneuvering and the gladhandling that was necessary to rise in the party ranks. I am in awe of Valentine. He’s scary smart and subversive and sort of amoral. Also, his name is Valentine. He gives me the vapors. If I had gone to high school with Valentine Wilde, I would have spent endless hours figuring out how to get him to notice me. MORE EYELINER? BIGGER HAIR? TELL ME.

My breathless crush on Valentine in no way decreases my mellower-but-still intense crush on the younger brother and main character of the trilogy, Timothy Wilde. Timothy is an idealist, disgusted by the push-or-be-pushed vibe that defines almost every interaction in New York. Where Valentine Wilde is the sweeping energy and breakneck pace of the city, Timothy Wilde is its humanity. He’s noble, he’s stubborn, and he’s the perfect candidate for a position with the brand new Police Department: politically protected by his influential brother but himself disinterested in politics, he just wants to solve some crime and make things a little safer for people who otherwise can’t fend for themselves. Throw in his unrequited love for the beautiful and unattainable Mercy Underhill and omg I have the vapors AGAIN. OVER HERE, TIMOTHY. I’M VERY SENSITIVE. I’LL HOLD YOUR HAND AND WALK ON THE BEACH IN THE RAIN.

Come for the characters, stay for the plots, move in for the fun. Jump in! The water’s fine! However much you enjoy them, though–remember, the Wilde brothers are mine. I’ll share, but if you try to take my men, someone better hold my earrings because we are going to throw down.

Action Items
The regular publishing day for Bookreasons is moving from Tuesdays to Wednesdays.If you would like to get email notifications of new posts, please click on the ‘Follow’ button in the lower right-hand corner of your screen, enter your email address, and click on the link in the verification email.

If you already subscribe, thank you! I will forever be grateful (and baffled) for your willingness to endure my nonsense.

6 thoughts on “The Reason To Go All In”