A couple of nights back, I had a dream about Thornton Wilder. (NO, you pervert. It was not an erotic dream. It was a respectful dream. Literarily respectful). This was a first for me. Not just dreaming about Thornton Wilder, but dreaming about any author. My dreams are generally unremarkable-the usual fare entailing talking animals, having the ability to fly, or showing up naked for a math test. I’m nothing if not Freud’s most boring case study. (Sometimes, a math test is just a math test.) As much time as I spend reading, you’d think my dream life would be heavily populated with literature, but it’s not. It’s perhaps notable that I don’t dream about books, but I’ve never expected have dreams about authors. You know what would be amazing? Character dreams. For instance, could Jay Gatsby please show up in a dream and make out with me? Yes, he could. JAY: THE DOOR IS OPEN. Instead, Thornton Wilder showed up and hung around while I ran around doing dream stuff.

For those of you who have not been visited recently by Dream Thornton Wilder, let me catch you up. Son of the Midwest and global citizen, Thornton Wilder (1897-1975) had a gift for taking appallingly complex philosophical, moral, and historical topics and presenting them in works both approachable and relatable. A novelist and a dramatist, he is probably most known today for the play Our Town, the deceptively simple story of the citizens of Grover’s Corners, New Hampshire. Our Town scored the Pulitzer Prize for Drama in 1938. In his spare, non-Pulitzer-winning time, Wilder wrote novels, and his 1927 book The Bridge Of San Luis Rey won the Pulitzer Prize for the Novel. OOOPS. I made a mistake there. I meant in YOUR spare non-Pulitzer-winning time. Then, because everyone needs a hobby and his two other Pulitzers were lonely, Wilder picked up a third one in 1942 for the play The Skin Of Our Teeth. All of which leads me to wonder if Thornton Wilder ever dreamed about showing up naked for the Pulitzer Prize ceremony.

It’s sad, but even three Pulitzer prizes cannot keep an author on the top of the best-seller lists indefinitely. Now is a good time to confess that the only Thornton Wilder I have ever read is Our Town, and I have not read it in a long, long loooong time. However, since Our Town has ascended to Required Reading immortality, it feels like I read it every other year when I was in school. I’ve also seen it produced a few times. (Because the set for the play is a minimalist masterpiece consisting of a ladder and a couple of side chairs, Our Town is incredibly cheap to stage, meaning you can probably go see it at a high school near you right now.) Our Town tells the story of the intertwined lives of the Gibbs and Webb families in tiny Grover’s Corners, New Hampshire. The geography is interesting but ultimately irrelevant-Grover’s Corners could be any small town in any part of rural America in the years between the World Wars. In the traditional arc of events in a traditional life-graduations, marriage, parenthood-Wilder examines our relationship with our mortality and what is means to be resilient, not just in the face of personal tragedy, but in finding the strength to thrive in the banality of everyday life. It’s heady stuff, but Thornton Wilder sneaks past everyone’s Serious Drama Alarm System with the folksy, wry Stage Manager character. The Stage Manager guides the audience through the play, observing and commenting on the unfolding events in Grover’s Corners. He serves as the viewer’s advocate and representative on stage, right in the middle of that small town action. It’s a devastatingly effective way to involve an audience, and no matter how many times I have seen Our Town, it never fails to move me.

Our Town is a breezy read, and I really liked it every time I read it, but it hadn’t crossed my mind in a long time. I don’t even own a copy, which I discovered the morning after the Ghost of Thornton Wilder Past crashed my dream. I was a little embarrassed, and I hoped that Thornton Wilder would not show up again so I wouldn’t have to explain to him that he’d visited someone who didn’t even own ONE of his THREE Pulitzer Prize-winning works. (Seriously, y’all, Thornton Wilder will take every opportunity to bring up those Pulitzers. BRAGGY.) Off I went to the bookstore to remedy this glaring oversight. After hunting all over, I finally had to ask for assistance. A quick online search revealed that the only Thornton Wilder inventory in the store was one copy of Our Town in the Required Reading section.  It would seem that Thornton Wilder has fallen somewhat out of fashion. Clearly, the time is ripe for a whole Our Town branding reboot. Why not? Jane Austen’s well-manned Georgia era young ladies now genteely kill zombies. Abraham Lincoln is ridding frontier America of a vampire scourge. Isn’t it time for the citizens of Grover’s Corners to operate a training academy for international spies? Maybe it can be the location of a secret laboratory for the CDC where they research and cure all the urgent diseases and train international medical spies? Or perhaps the whole town collectively owns a maple syrup factory, which serves as a front for a safe house for international spies. I think you see where I am going with this. 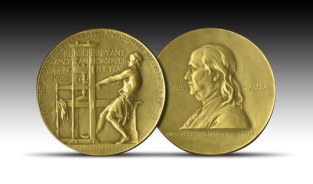 Picked up some souvenirs from the Columbia University bookstore.

I’m not sure what possessed Dream Thornton Wilder to show up in my head, but clearly, he was slumming. If he’s looking to stage a comeback, he is doing it all wrong. I mean, I appreciate the consideration, but this Tiny Book Blog isn’t exactly going to deliver a splashy re-entry. I know he’s dead, but I think even dead Thornton Wilder could score a seat on James Corden’s couch or the cover of People magazine.

Action Items
Thornton Wilder wrote the screenplay for one of the best Alfred Hitchcock movies, Shadow of a Doubt. Netflix and chill with that.

3 thoughts on “The Reason I’m Sleepy”