Out of all the things that make me really uncomfortable (spiders, tax forms, Hiddleswift), nothing induces as much squirming as the thought of navigating the complex landscape of real estate. I’m not really the detail-oriented type who can’t wait to purchase a house. It feels like a system set up to make me fail. I marvel at the intrepid homebuyers on HGTV. They aren’t afraid of anything. They just march into house after house, joyfully embracing discussions about open floor plans and masters on the main and common areas. I’m always baffled when the production-driven nitpicking starts. The doorways are too big or the floor is too shiny or the bathtub isn’t big enough to bathe the family llama. These places look great to me when they apparently are actual landfills filled with medical waste and the tears of interior decorators. Since I’m missing all the flaws that are painfully obvious to even the most novice HGTV homebuyers, I’m probably unqualified to successfully find a domicile in real life. Then, there is my fear that I would accidentally buy a haunted house. That is a real fear. It happened to those people in Amityville. I read all about it.

The Amityville Horror tells the Very True (cough, cough, ahem) story of the Lutz family, who purchased the most pig-haunted, hostile-fly-infested, demon-y house available in Amityville, Long Island, in December 1975. The house was the site of six horrific murders in November 1974,  only 13 months prior to the Lutz family moving in.  After enduring 28 days of torment at the hands of vengeful, disturbed ghosts, the Lutzes abandoned the house, leaving their possessions and fleeing in the middle of the night. They did not “move out” so much as escape. The book about their reported experience was published in 1977, was a sensational bestseller, and spawned a series of informative movies about how to live in a haunted house. The debate about whether or not the haunting was real, if the family actually experienced genuine ghost harassment, continues today. I have an entirely different theory, however. I might be alone here, but I am pretty sure The Amityville Horror isn’t about demons crossing back over to play with human emotions. It’s about real estate anxiety. A LOT of real estate anxiety.
Real Estate Agent: This room could be used as an office
Me: Nice
Real Estate Agent: Or to talk to the dead
Me: What?
Real Estate Agent: Nothing

I read the book at a very impressionable age, by which I mean when I was in fifth grade I stole it out of a stack of paperbacks that belonged to my parents. (The undeniable allure of the Forbidden Grown-Up Book Stack is also responsible for my reading The Godfather, but we’ll talk about that book and my propensity for petty book theft another day.) Even to my juvenile eyes, the book was pretty lurid. I comprehended that it was dumb to believe that a house was being haunted by an evil pig named Jodie, but I was very concerned about the possibility that my personal house might be targeted by red-eyed evil Jodie haunting pigs just because I’d read the book. How can you even tell if an evil pig is loitering in a potential home purchase? Or any home, for that matter? I’m fine with chihuahuas or urban chickens or komodo dragons, but I am drawing the line at unfriendly bacon with an agenda. Had my parents failed to do their research when buying the house we were in? I couldn’t ask them because no way was I going to confess that I’d pilfered a book from the forbidden zone. I was just going to have to be on permanent, hyperalert guard for disembodied voices telling us to “get out”.
Real Estate Agent: Look at this lovely open floor plan
Me: What does that mean exactly
Real Estate Agent: You can fit a lot of evil ghost pigs on this floor
Me: Ah

Everyone likes a bargain, and everyone wants to get the most house for the least money. But if the house you are buying is a crazy deal because people were recently murdered there, then maybe it’s not the best time to enter the housing market. Sadly, the Lutzes did not heed this advice. Sidebar question: does this advice seem unreasonable to anyone? From where I sit “don’t get the murder house” doesn’t seem controversial or even provocative, but apparently the only response to “Maybe get a different house than that recent crime scene one” is “HOW DARE YOU EVEN SUGGEST I NOT BUY THAT HOUSE” (throw money at real estate agent). It’s a homebuying shortcut that I am not willing to entertain. 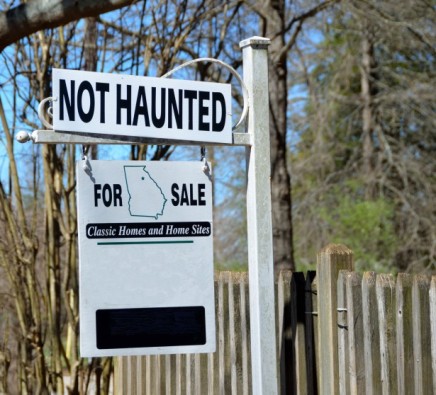 The Amityville Horror is a worst case real estate scenario, second only perhaps to that vampire castle in Romania. The Lutzes were only trying to find a place to raise a newly blended family. Finding a place to live is hard, and finding a demon-free place that you think you might like is just an invitation for the universe to be a jerk by: 1. Make everything in your new place break, often simultaneously and 2. Make you hate everything in your place, often simultaneously, requiring expensive and endless renovations. Either way, you’re under attack by otherworldly forces trying to steal your soul. It’s enough to make staying in your parents’ basement look appealing forever.
Contractor: We’re here to tear up the floor
Me: (screams in terror)
Contractor: I get that a lot

The universe is a jerk when it comes to reading stolen books, too. About halfway through the chunky paperback of The Amityville Horror, I was reading about how the family was plagued by swarms of flies inside the house. The haunted drama created by the menacing Amityville fly gangs had me totally transfixed. I was therefore unprepared when I turned a page only to find that at some point an actual fly had become trapped in the book and entombed, completely flattened out like a creepy fly zombie bookmark. I threw that book across the room so fast it would have registered on a radar gun, grabbed my shoes, and fled my house for the sunny, safe outside. I get you, Lutzes. Bookreasons OUT.
Contractor: Question about interior paint
Me: Ok
Contractor: Should the color match the red of the blood dripping down the walls?
Me: YES. I love holistic design

Action Items
If you like haunted house novels that are actual fiction, I recommend Slade House by David Mitchell. It’s 100% fly free.

2 thoughts on “The Reason For Full Disclosure”